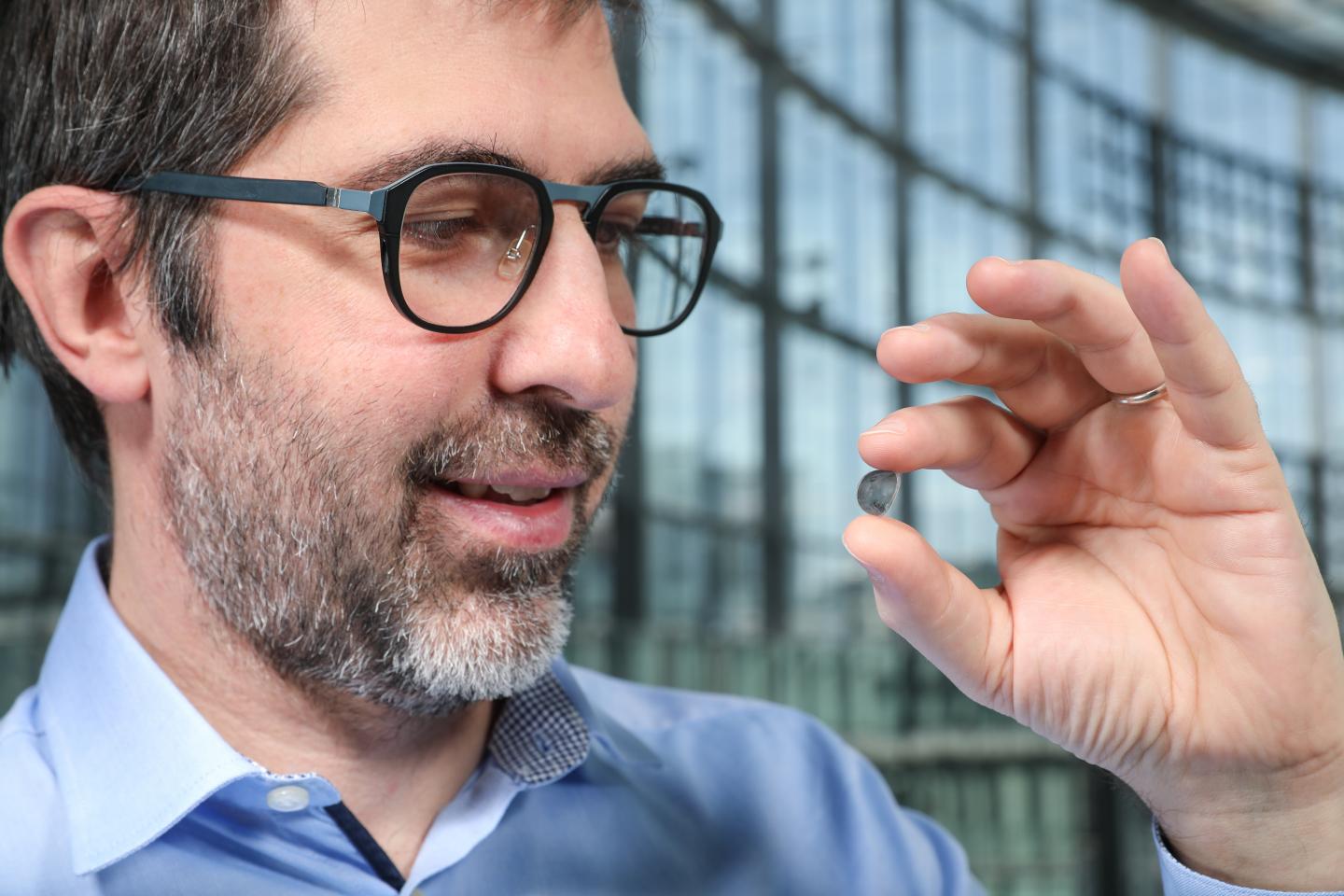 Being able to make blind people see again sounds like the stuff of miracles or even science fiction. And it has always been one of the biggest challenges for scientists. Diego Ghezzi, who holds the Medtronic Chair in Neuroengineering (LNE) at EPFL’s School of Engineering, has made this issue a research focus. Since 2015, he and his team have been developing a retinal implant that works with camera-equipped smart glasses and a microcomputer.

“Our system is designed to give blind people a form of artificial vision by using electrodes to stimulate their retinal cells,” says Ghezzi.

The camera embedded in the smart glasses captures images in the wearer’s field of vision, and sends the data to a microcomputer placed in one of the eyeglasses’ end-pieces. The microcomputer turns the data into light signals which are transmitted to electrodes in the retinal implant. The electrodes then stimulate the retina in such a way that the wearer sees a simplified, black-and-white version of the image. This simplified version is made up of dots of light that appear when the retinal cells are stimulated. However, wearers must learn to interpret the many dots of light in order to make out shapes and objects.

“It’s like when you look at stars in the night sky – you can learn to recognize specific constellations. Blind patients would see something similar with our system,” says Ghezzi.

The only catch is that the system has not yet been tested on humans. The research team first needs to be certain of their results. Ghezzi says: “We aren’t yet authorized to implant our device in human patients, since obtaining the medical approval takes a long time. But we came up with a process for testing it virtually – a type of work-around.”

More specifically, the engineers developed a virtual reality program that can simulate what patients would see with the implants. Their findings have just been published in Communication Materials.

Field of vision and resolution

Two parameters are used to measure vision: field of vision and resolution. The engineers therefore used these same two parameters to evaluate their system. The retinal implants they developed contain 10,500 electrodes, with each one serving to generate a dot of light.

“We weren’t sure if this would be too many electrodes or not enough,” says Ghezzi. “We had to find just the right number so that the reproduced image doesn’t become too hard to make out. The dots have to be far enough apart that patients can distinguish two of them close to each other, but there has to be enough of them to provide sufficient image resolution.”

The engineers also had to make sure that each electrode could reliably produce a dot of light. Ghezzi says: “We wanted to make sure that two electrodes don’t stimulate the same part of the retina. So we carried out electrophysiological tests that involved recording the activity of retinal ganglion cells. And the results confirmed that each electrode does indeed activate a different part of the retina.”

The next step was to check whether 10,500 light dots provide good enough resolution – and that’s where the virtual reality program came in.

“Our simulations showed that the chosen number of dots, and therefore of electrodes, works well. Using any more wouldn’t deliver any real benefits to patients in terms of definition,” says Ghezzi.

“We started at five degrees and opened up the field all the way to 45 degrees. We found that the saturation point is 35 degrees – the object remains stable beyond that point,” says Ghezzi.

All these experiments demonstrated that the system’s capacity doesn’t need to be improved any further, and that it’s ready for clinical trials. But the team will have to wait a little longer before their technology can be implanted in actual patients. For now, restoring vision remains in the realm of science fiction.