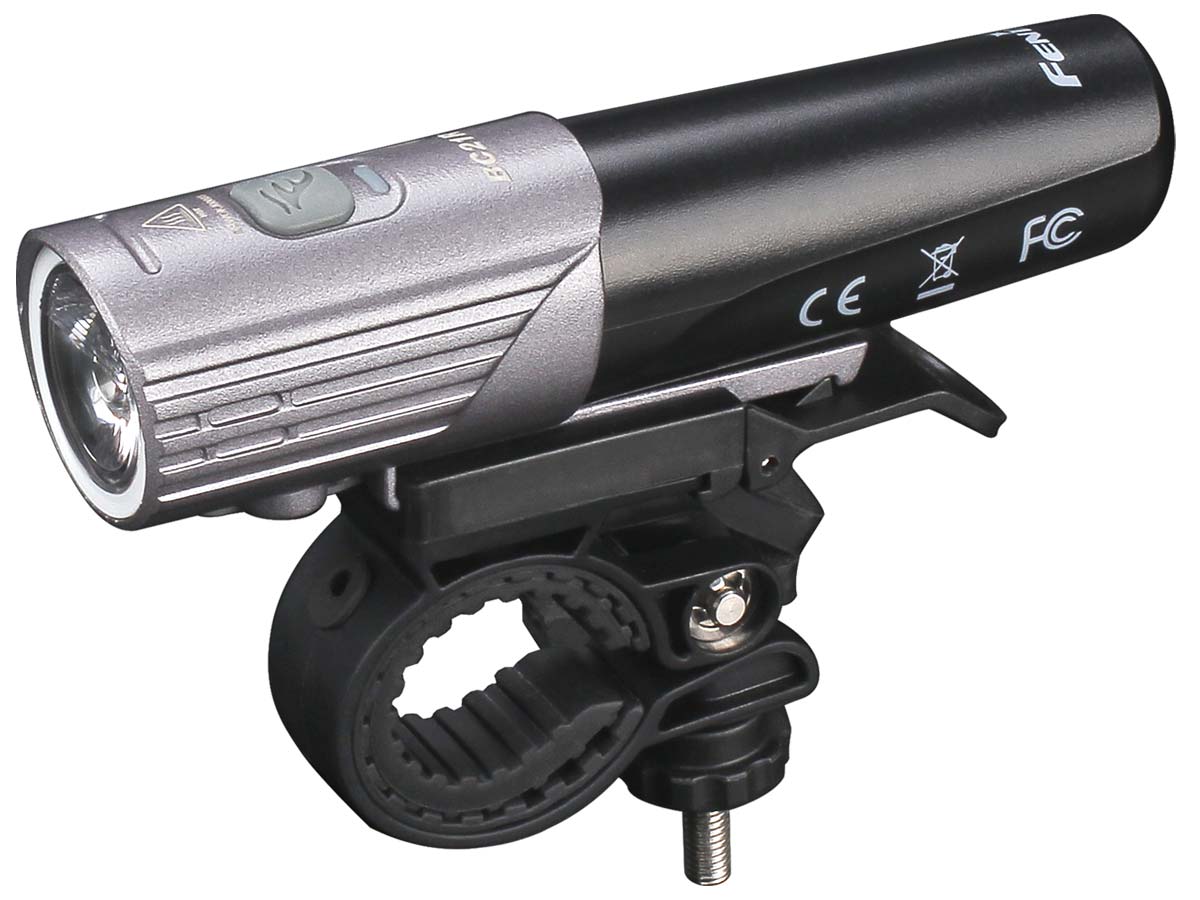 Since 2004, Fenix Light has been manufacturing quality lights ranging from flashlights and headlamps to lanterns and bike lights.

There are many folks who ride their bicycles at night for various reasons. Whether on-road or off-road, there is always the need to see the path ahead of you. During the day, it’s wise to have a really bright strobe light so others around you can see you coming.

The original 880 lumen BC21R was released some years ago. Besides the main light, it also had two red lights at the side. However, there were several complaints about this older version. The main ones were:

With the launch of the new light, now called the BC21R V2.0, the folks at Fenix have kept all of the good features and added a bunch more, as well as remedying all of the complaints from the original. In a nutshell, it offers:

The increase from 880 to 1000 lumens means that there is now better coverage of the road ahead. The dual distance beam system means that the areas both near and far are illuminated. They do this by graduating the top half of the front lens that refracts some of the light down towards the front wheel, allowing the rest of the light to illuminate the roadway.

When you do not need all 1000 lumens, sequential taps of the on/off switch will cycle through the different output settings of low, medium, high and turbo. In any of these modes, a double tap of the switch will put the light into strobe (alternating high and low output) mode. On a fully charged battery, runtime on Turbo is published as being 2 hours, and on low at 50 hours.

Many lights today are sealed units. Once the battery stops taking a charge, the light would have to be discarded. The removable battery means that, once it reaches end of life ,it’s a simple matter of inserting a new 18650 battery. Also, should you be on a really long ride and find that the battery starts going flat, you could stop along the way and swap out the battery for either another fully charged one or two CR123 batteries.

At any time, you can tap the on/off button, which will light up an indicator to tell you the current state of charge of the battery. This same indicator will flash red when it’s time to recharge the battery.

To prevent damage to the LED light source, temperatures are monitored and, if the light gets too hot, the output is reduced. This is not ideal when you are out on a ride on a hot evening. By changing the head from plastic to metal with cooling fins, however, the light will now remain cooler, allowing for full output for longer periods.

Instead of a stretchy plastic mount like on the older model, Fenix has now gone with a proper clamp type mount. This is secured to the handle bars using a thumb screw; and then there is a quick release that allows the light to be attached or removed from the clamp with ease. Two different-sized rubber inserts for the clamp ensure a good fit on different diameter handle bars.

A bonus of this type of quick release mechanism is that the light is now compatible with the Fenix helmet mount should one wish to mount it there. Also, should you wish to use the BC21R V2.0 as a handheld flashlight or to stop it being stolen, no tools are required to remove it from either the bike or helmet mount.

It puts out a very concentrated spot-like type beam optimised for distance. The lens setup ensures that most of the light is below the horizon where it needs to be, which also makes sure that it does not blind oncoming motorists.

The light will start getting warm to the touch when stationary or when hand held. However, when cycling, the cool air passing over the finned head does keep the light cooler.

Being a single 18650 battery light, a ride of longer than about 90 minutes will see the light starting to reduce output. It’s the tradeoff of size vs run time. Therefore make sure that, if you’re going to need the full 1000 lumen output for an extended period, to carry a spare battery with you.

The older model cost $75, and the good news is that Fenix appears to have maintained this price even with all of the extra features of the V2.0 model. This places the BC21R V2.0 in the mid- to high-range of  single battery lights. Given the features and multi-use applications it’s pretty good value for money.

Not all data scientists are created equal