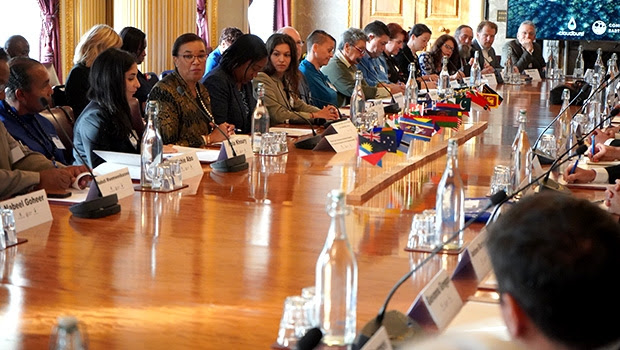 Common Earth is a programme that is designed to create a network of projects that could be replicated and adapted to any community, country or region.

Government officials, environmentalists, scientists, economists, and representatives from indigenous groups from around the Commonwealth recently met at the organisation’s headquarters in London to discuss how the initiative can achieve sustainable development whilst protecting the planet.

“It is not game over in the battle against climate change its game on,” said Secretary-General Patricia Scotland. “Because this about looking at practical, existing strategies to clean streams, restore forests and damaged ecosystems, protect marine health, educate our populations and challenge the economic and development approaches that led to the decline of our planet.

“It is about a development model that takes into account the ancient wisdom of the indigenous peoples that found a way to live in harmony with their environments, and integrates it into our scientific advances and solutions to climate change. And it is a model I will take to ministers in our upcoming trade and finance summits and heads of governments at their meeting next year.”

Common Earth, she said, will be based on regenerative economic models.

Economist Stuart Cowan explained how these types of economies will work: “When we talk about regenerative economies we are looking at cycles of growth transformation. We are looking for ways to bring ecological systems back into full health and blossoming, and figuring out how our economies can meet all our needs, while nature flourishes.

“So as we think about climate change the health of living systems is critically important. The way we use our land, grow our food and design our cities and transportation systems can reduce carbon emissions rapidly and efficiently.”

The Common Earth project will be hinged on the activities of five working groups:

Nichie Abo, a member and former chairman of the Tribal Council for the Kalinago Indians in Dominica, described the conference as important in providing solutions to climate change. He gave an overview of the Kalinago Global Resilience projects, which have created approaches to building infrastructure and farming that can help to protect, preserve and restore natural resources.

“The Kalinago way is simple, it is not materialistic, not extractive, it has respect for the earth and the entire environment and we view ourselves as one element in the circle of life,” he said. “What has brought us to this point is that we are not spiritually connected to the earth. And this indigenous philosophy is what the world is now returning to because Western societies have recognised, and science has proven the benefits of the indigenous way of life.”

Rola Khoury, CEO of the Common Earth implementation partner the Cloudburst Foundation, said: “The Common Earth Commonwealth Regenerative Development Convening was an unprecedented meeting between scientists, regenerative and drawdown practitioners, and diverse communities including many youth and indigenous peoples who came to discuss the importance of integrated climate action to restore ecosystems and communities.”