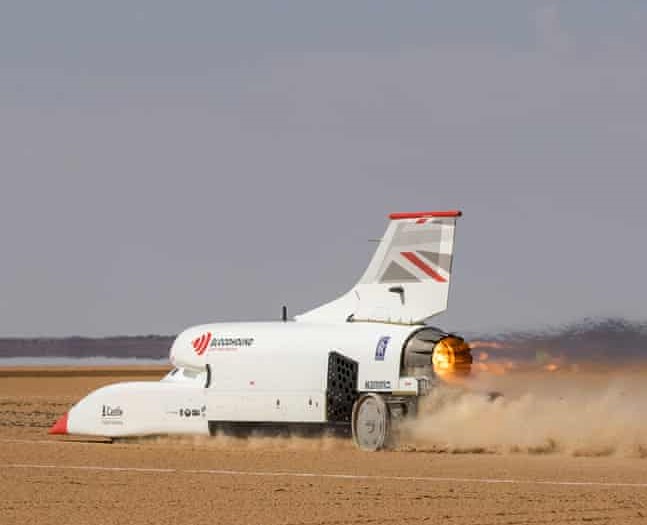 In 2019, the Bloodhound team deployed out to South Africa to conduct high-speed testing of one of the most advanced straight-line racing car in history.  The car surpassed the test programme target of 500 mph, hitting a peak speed of 628 mph (1011 km/h). This validated the computer modelling used in designing the car and proving that Bloodhound has the record-breaking capability.

Completing the rocket installation and taking the car to South Africa — the team is based in the UK — to exceed 800 mph will cost £8-million, based on the costs of the test programme to date. The project aims to recoup increasingly large amounts through sponsorship and rights sales as the programme develops.

Bloodhound LSR’s current owner and chief executive Ian Warhurst is now stepping back from leading the project and putting the vehicle up for sale.  After buying the car at the end of 2018, Warhurst rescued Bloodhound from the scrap heap and ensured the team deployed to South Africa in 2019 to complete the high-speed test programme.

However, the current economic climate brought on by the global pandemic has impacted the search for fundraising and the project timeline. As a result, Warhurst is looking for a buyer of Grafton LSR, the holding company that owns the Bloodhound LSR project.  The new owner will inherit a high-speed car with a demonstrated potential for an 800+ mph world land speed record.

“It has been a privilege to lead this team of world-class engineers over the past two years,” says Warhurst. “I was spellbound — along with a huge audience around the world — as we tested the car up to 600+ mph in South Africa.”

“When I committed to take the car high-speed testing in 2019, I allocated enough funding to achieve this goal on the basis that alternative funding would then allow us to continue to the record attempts. Along with many other things, the global pandemic wrecked this opportunity in 2020 which has left the project unfunded and delayed by a further 12 months.

“At this stage, in absence of further, immediate, funding, the only options remaining are to close down the programme or put the project up for sale to allow me to pass on the baton and allow the team to continue the project. This gives someone with the right passion and available funding to effectively swoop in at the last minute and take the prize. I will, of course, be cheering from the side-lines when Bloodhound smashes through 800 mph.”

The alternative to a buy-out would be to put the car into long-term storage, with no certainty of being able to restart the project.

Bloodhound driver Andy Green commented: “The Bloodhound team has built the best Land Speed Record Car ever.  It made our 628 mph test run look easy!  We’re now raring to get to 800 mph+, to showcase this technical marvel and to invite a global audience to join in an incredibly exciting adventure.  After the horrible 2020 pandemic year, we have all just experienced, the world needs a good news story, and Bloodhound is ready to deliver it”.