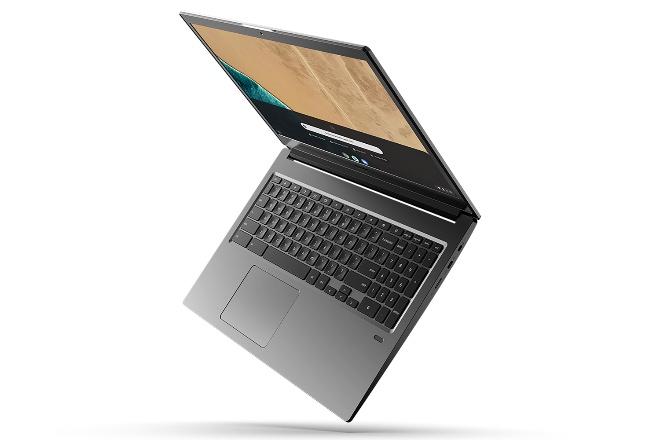 The Chromebook market has been perceived as very consumer-focused, until the recent introduction of management tools for Chrome OS.

To complement these corporate management tools, Acer has released the Chromebook 715, aimed at the business person that works in the cloud, in South Africa.

The unit we reviewed contained an Intel Core i5-8250U, 16GB of RAM, and 128GB of eMMC storage. All of this was housed in a sturdy aluminium body.

On the left side, the computer features a USB Type-C port for charging and data transfer, a standard USB Type-A port, and a headphone jack, while on the right it has a Kensington Lock, another USB Type-C port just for connectivity and a microSD card slot.

When open, the narrow bezelled 15.6″-inch display has a Full HD resolution for crisp lettering in documents. The wide colour gamut also ensures that colours are accurately represented on screen.

The keyboard features a first for Chromebooks: a num-pad. This is especially useful for those working with spreadsheets on Google Sheets or Excel Online, or accountants working in web apps like Xero.

The overall design of this computer shows the professional look Acer was going for with a business-facing Chromebook. It has a grey aluminium body, which looks heavy, but comes to a mere 1.8kg. It’s much lighter than it looks for an almost 16″ laptop.

The performance is great and switching between web apps is fast. This is thanks to the embedded i5 processor, which doesn’t make as much of a noise as its Windows counterparts.

The computer isn’t for the “slashie”: those who run their personal and business lives on the same device. As a result, games don’t run on the computer because it doesn’t run applications. This asserts the device’s status as a purely business-focused device.

Apart from the hardware features, the computer is handled via the lightweight Chrome OS.

Chrome OS is Google’s answer for those who only work with web apps, and don’t want their computer’s performance hindered by unnecessary apps. With the increasing power offered from web apps, the computer application as we know is likely to disappear eventually.

With Google’s Apps for Work platform, the Chromebook lends itself to the same admin management tools that exist on other platforms.
The integrated 45 Wh battery may seem small but operates for around 9 hours, thanks to the lightweight software and good battery management.

Overall, for those who want a no-nonsense approach to computing, the Acer Chromebook 715 may be their best next device. However, its pricing at R7,999 may deter those who would expect to pay less.

Related Topics:AcerChromebookproduct of the day
Up Next